Celebrating Who We Are

“It wasn’t a protest. The agenda was to work together, not to argue about Martial Law.” -Liz Fenkell

Labor rights icon Dolores Huerta was a guest speaker at the 2015 Filipino Fiesta of Sacramento.

The annual Filipino Fiesta in Sacramento is a very popular community event that has roots in the struggle for social justice through grassroots community organizing. What started off as a revolutionary attempt to promote collaboration in Filipino American Communities has blossomed into a successful, highly-anticipated, yearly showcase of Central Valley Filipino-ness.

Celebrated on June 12, Philippine National Day is an official holiday in the Philippines that commemorates its birth as a sovereign nation in 1898 after several centuries of colonial rule by Spain. Filipino revolutionary forces had liberated the majority of the archipelago from Spanish rule over a three-year insurrection, and the last vestiges of the former global empire were holed up within the walls of their fortress at Intramuros, Manila. Completely surrounded and under siege by their former subjects, the Spanish saved some face when a budding new economic power, the United States, pretended to overthrow them in May 1898. Refusing to recognize the new Philippine Republic, the US purchased the former colony from Spain for $20 million and occupied it for another 5 decades.

During the 1970s, “barrio fiestas” started happening across the US. They were generally apolitical events, but in reality, these events were actually a coordinated project of the Katipunan ng mga Demokratikong Pilipino(Union of Democratic Pilipinos, or KDP) that was aimed at promoting unity amongst Filipinos in the US, a group that had earned a reputation for their “crab mentality.”

Celebrating Philippine National Day (PND) as a barrio fiesta was first piloted in 1975 at Sacramento City College. Lead organizers Maxi Villones, Vince Reyes and Dick Mazon wanted to organize an event that reflected the spirit of the times: rising political awareness, celebrating cultural heritage, and also celebrating histories of struggle. The first official event was held a year later at nearby Miller Park along the Sacramento River.

At that time in Sacramento, in addition to several regional and trade organizations, there were two activist organizations: the KDP and the Anti-Martial Law Coalition (AMLC).

Founded in 1973 in nearby Santa Cruz, The KDP was a nationwide collection of Fil-Ams and Filipino immigrants who were involved in community organizing around social justice issues in the US and democratic nationalism in the Philippines. They openly supported the Communist Party of the Philippines and the New People’s Army.

The AMLC was a more popular front for the KDP that focused on raising awareness about the economic plundering and human rights abuses being perpetrated by the dictatorial regime of Ferdinand Marcos.

Before his political career, Ferdinand Marcos had been a lawyer, and one of his clients happened to be Severino Santa Romana, who was arguably the most important man in US history. Allegedly, Marcos used his access to Japanese war loot that had been discovered by Santa Romana to launch a political career for himself and to cement the political dynasty of his family.

Marcos, who had a 1939 murder conviction overturned by the Philippine Supreme Court when he was just 23, was first elected to the Presidency in 1965 after a 16-year run as a Legislator. He claimed to be a war hero, but later research has proven that he lied about his war record. In fact, his father was executed for collaborating with Japanese occupation forces, and he has himself been accused of doing the same.

Soon after becoming President, Marcos sent troops to Vietnam, engaging the Philippines in Uncle Sam’s escalating occupation of its neighbor to the west.  Using $56 million of public money to fund his campaign, Marcos became the first Philippine President to win re-election in 1970. Two years later, Marcos staged a series of fake terrorist attacks that he used as a pretext to declare Martial Law via Proclamation No. 1081. Martial Law enabled him to stay in office well past the two-term limit that had previously been mandated by law. Over the course of his 20-year Presidency/Dictatorship, Marcos looted the Philippine economy to make himself, his family and his closest cronies extremely wealthy. He also used $2.5 billion in aid from the US to expand his police state, suppressing any and all opposition with violence both within the archipelago and abroad as well.

The Sacramento community was very polarized at the time. There had long been divisions along regional, country of origin and class lines, but Martial Law created a more serious rift. Anti-Marcos people tended to be idealistic youth mixed with some progressive elder immigrants. However, these individuals were marginalized in the predominantly conservative community. Pro-Marcos people were pretty much everyone else: dogmatic anti-communists who tended to be older, Fil-Ams who had grown up patriotic, and conservative immigrants. In addition to the fact that Sacramento was a conservative town in general, there was also a large contingent of Ilocanos (Marcos was Ilocano) in the region. In an era where Marcos could push a button on his perceived enemies anywhere on the planet, openly criticizing Marcos took a lot of courage.

Dick Mazon had grown up in Sacramento, and was attending Sac State when Vince Reyes recruited him into KDP. Mazon and Reyes shared a family connection, and had been familiar with each other for years prior to teaming up in college. Mazon was studying Social Welfare, and eventually got a Masters Degree in Social Work. He has since made a long career of community organizing in the Sacramento area, including the creation of a Filipino community center and successfully advocating for a culturally relevant free lunch program for Asian seniors. “I’m just a lucky guy who happened to be in the right place at the right time with the right people,” Mazon says about his role in organizing the PND events.

Prior to the PNDs, Fil-Am cultural events were limited to dinner dances and beauty pageants, both of which were typically held in the evening. Also, both of those types of events were celebrations of western culture and aesthetics, so KDP promoted the barrio fiesta model because it was more authentically “Filipino.” In contrast to trying to prove assimilation, the PNDs were daytime events that attempted to rally the progressives and bring together other community organizations as well.

Liz Fenkell, Maxi’s sister, joined the organizing committee in 1976, in time for the first official PND at Miller Park. A member of both KDP and AMLC, she had been born in Sacramento and had grown up with Maxi in nearby Isleton, where they experienced first-hand the plight of migrant farmworkers. Although she considered herself an activist and worked hard to raise awareness about the Marcos Dictatorship, Fenkell maintains the following about the first PNDs: “It wasn’t a protest. The agenda was to work together, not to argue about Martial Law.” 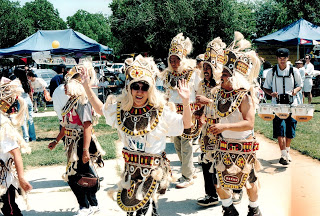 The Aklan Association of Sacramento celebrates during the 1997 Filipino Fiesta.

At a time when identity politics were first coming into being, the organizers wanted simply “to celebrate who we are.” As officially stated in the 1979 PND program, the organizers sought “To overlook and go beyond the surface differences such as regional, educational, age, or even religious beliefs.”

Held on the second Saturday in June, PNDs were an inclusive opportunity to talk about issues that affected Filipino Americans. It was a forum to raise awareness about issues like racism, women’s rights, workers’ rights,the plight of Filipino medical professionals, and the legacy of the Manongs in the Delta. It was an excellent example of using culture to organize.

Sonny Alforque moved to Sacramento from the Bay Area in 1978, and Cynthia Bonta recruited him into the Coalition Against the Marcos Dictatorship (formerly AMLC) since both were University of the Philippines (UP) alumni. Sonny had worked at the UP radio station as a student hosting music and educational shows. With a background in drama and theater arts, Alforque elevated the committee’s ability to celebrate Filipino arts and Filipino artists. He was so good at it, that he made it his life mission, and eventually created the Sinag-tala Filipino Theater and Performing Arts Association (STFTPAA).

During the Presidency of Dolores Pizarro in the late 70s, FCSV was on board with PND, but by the 80s, once she was no longer in power, FCSV started doing their own event at the Rizal Center. FCSV’s Filipino Food Faire was much different from PND. It was held mostly indoors on a Sunday in June, was much smaller in size and lacked youth involvement.  Both events began to suffer from the division, and attendance started to dwindle. At this point, Mazon approached then-FCSV President Jan Gorre about joining forces. Marcos was already out of power by this time, the KDP had dissolved, and Gorre agreed to collaborate. The Filipino Fiesta as we now know it was born.

The Fiesta started off as a joint project between FCSV and the recently-formed Philippine National Day Association (PNDA), which grew out of the original PND organizing committee. The Filipino American Veterans Association (FAVA) soon joined as an organizing partner, and the event enjoyed steady growth every year. By the late 90s, more and more organizations wanted to be involved with the planning, and a 501(c)3 named “Filipino Fiesta of Sacramento” was formed as a coalition of 6 community organizations. The organizations that are still currently part of the coalition are: FCSV; Filipino Women’s Club of Sacramento; Pacific Rim Heritage Foundation; STFTPAA; The Ilocanos of America; and The University of the Philippines Alumni Association, Sacramento and Vicinity.

Held on the first Sunday in June at the Jose Rizal Center in South Sacramento, some 6000-8000 people attend annually. The politics continue to live on primarily in cultural and historical performance pieces, but there are now corporate sponsors, a beauty pageant, a parade, food, vendors, community organizations doing outreach, career and health fairs, and even a car show as well. 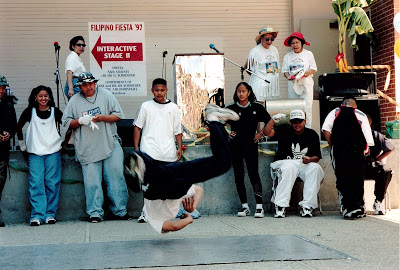 Some elements from the PND events that live on in the Filipino Fiesta are a heavy emphasis on youth involvement, collaboration within the Fil-Am community, showcasing Filipino culture and talent, and promotion of good relations and understanding amongst diverse cultural groups.

Jay Paular grew up in Sacramento, attended both Sac City and Sac State, and was involved with the Filipino clubs at both schools. He says that he always wanted to get closer to his Filipino roots and history, and so community organizing was his way to do that. He was there at the beginning of the PNDs for about 10 years, then left, and was asked back to do a Filipino martial arts demo about 2-3 years ago. He has gotten involved with the local Filipino American NationalHistorical Society (FANHS) chapter in recent years, and he considers supporting the Filipino Fiesta to be part of that work. “It’s grown. PND was just a few organizations. Through the years, more and more organizations have joined, and it’s a much bigger event now.”

Much bigger indeed. However, it never would have gotten to this point if a handful of brave, young, idealistic people hadn’t come up with the genius idea of working together to celebrate cultural pride.

LIMITED ADMISSION DUE TO PANDEMIC RESTRICTIONS!!!